Have you ever been...

LULU (the album by Lou Reed & Metallica you all probably heard about) is out now since over a month. Sadly, a pretty bad typo has not been corrected in time: Ulrich Maas plays the cello on two of the titles. Well, there is no cellist by that name - it is me, Ulrich Maiss who performs on that CD. 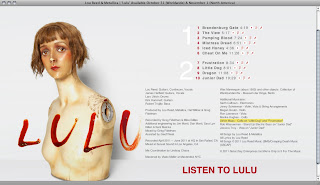 Maybe future editions will be corrected, so this here is just for the record…

Also, I did not play any string arrangements. I was in the studio with Lou in March recording improvisations. Call it "instant composing" if you like. It was a very creative and intimate process which led to the music for the play "LULU" directed by Robert Wilson.
The material on "Little Dog" and "Frustration" comes from these sessions.

Postscript | December 19, 2011
So, finally, after almost 2 months the spelling of my name has been corrected online…wow!